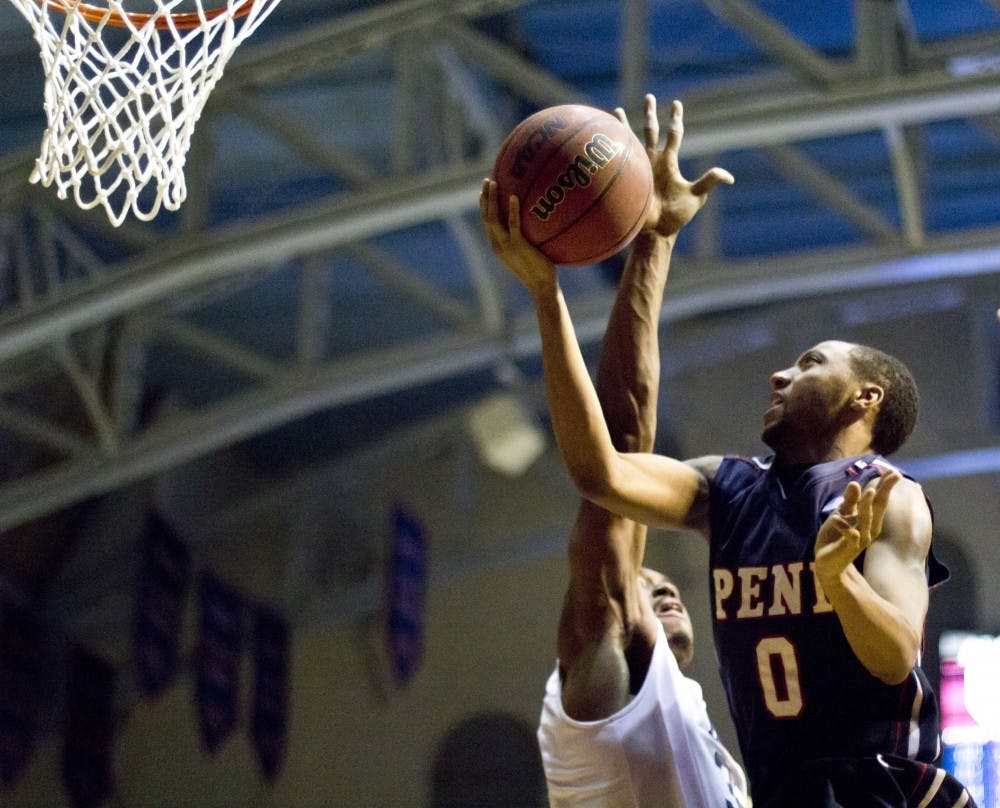 P enn’s loss to Yale Saturday night was difficult to watch. But not for the typical reasons.

Not for the predictable trailing off after a hot start, which Penn did by frittering away what was once a 12-4 game-opening lead by the final few minutes of the first half.

Not for the characteristically back-breaking turnovers, which gave Yale a 14-0 advantage in points off of turnovers by halftime.

And not for Penn’s now-trademark offensive ineptness during crunchtime, which manifested itself with a hopelessly off-kilter three-point attempt from senior captain Miles Jackson-Cartwright immediately following a timeout from coach Jerome Allen with Penn trailing 63-60 and 1:14 remaining in the game.

No, Penn’s feeble finish was painful because of how the night began.

Senior Night opened with Penn’s five seniors - Jackson-Cartwright, Fran Dougherty, Cam Gunter, Dau Jok and Steve Rennard - getting congratulated by Allen at center court for their contributions to Penn basketball, families in tow and a standing ovation surrounding them from the stands.

For that five-minute pregame stretch, Penn basketball was great again.

After all, these are great student-athletes. Jok’s humanitarian endeavors have been well-documented, but Dougherty’s offseason work ethic and Jackson-Cartwright’s still-enduring competitive fire have always been exemplary too. These are special individuals playing in “a special place,” as Cartwright called the Palestra after the game.

And that’s exactly why Penn’s loss was so painful ­- it was the sobering, final shot of novocaine for a Penn basketball fanbase already numbed into oblivion by the repetitive losing of a broken program.

No more chances for this class of Quakers to rejuvenate the Red and Blue faithful at the Palestra. No more opportunities to get fans believing instead of grieving at the Cathedral again.

It’s a shame, then, that most Penn basketball fans will be too numbed by one final fallen homestand to feel for these senior Quakers, who have fought hard in a futile effort to right this ship. It’s too hard to think about the fact that Penn basketball is more than just wins and losses for these young men when wins don’t even seem to be a possibility anymore.

But it’s also scary to think about the probability that almost every Quakers fan who stood in tribute during the Senior Night standing ovation sat down afterwards knowing that Penn was about to lose for the 40th time in the past two seasons.

More than any other legacy or memory, it’s this feeling of inevitable failure that will be forever associated with these seniors among the majority of Penn basketball fans. Fairly or unfairly, the good moments these seniors have created and enjoyed on the court these past four years have been too few and far between to endure.

You don’t have to forget about the hows and whys of Penn basketball’s decline. You don’t have to stop fantasizing about how soon Athletic Director Steve Bilsky’s or Allen’s successor will arrive.

But now that the standing ovation is over, keep supporting these graduating seniors as they get ready to move on, even if they’ve all had hands in the decline of the program that you’re straining more and more to care about. After all, they’ve never been the enemy.

It’s okay to point your fingers at these seniors as long as you’re willing to shake their hands too. That’s what Senior Night should always be about, and on Saturday night, it was. At least until Penn lost again.