The Quakers' 71-61 victory over Harvard was the 68th career win for seniors Kathleen Roche, Kara Bonenberger (who was honored before the game for scoring her 1000th career point earlier this month), Renee Busch and Katy Allen, breaking the record they had previously shared with the senior class of 2003.

Penn defeated Yale easily on Friday, 61-42, before outscoring Brown, 83-75, on Saturday to sweep the Ivy weekend doubleheader on the road and take sole possession of second place in the Ancient Eight.

Down, but certainly not out. Although Penn women's basketball will hit the road once again this weekend, the squad has no plans of going anywhere in the larger picture -- the race for the Ivy League title -- despite last Friday's letdown against Cornell. After splitting last weekend's contests with the Big Red and Columbia, the Quakers (12-7, 3-2 Ivy) will travel to New Haven, Conn., to face Yale on Friday before wrapping up their fifth road matchup in seven games against Brown on Saturday. While this weekend's slate of back to back games represents the third of six consecutive Ivy doubleheaders for the Red and Blue, coach Mike McLaughlin is confident in Penn's physical and mental states, despite the loss to Cornell. "We have some kids that are banged up like every other team, but physically we're in good shape," McLaughlin said.

Penn women's basketball had fun in its 78-57 demolition of Columbia on Saturday. The Red and Blue came within one point of the school's first-half scoring record, four players scored in double digits and senior Kara Bonenberger notched her 1,000th point. But the win – although impressive – was inconsequential when compared to the results of the previous night's game.

The Quakers exploded offensively on their way to a 78-57 win over Columbia, a good confidence booster after Friday night’s loss to Cornell.

Cornell came into the Palestra and beat the Quakers, 60-49, leading from the game's early moments all the way through to the final buzzer.

The Palestra will see its first Ivy action of the year from the women’s team as the Quakers take on Cornell on Friday and Columbia on Saturday.

This weekend's competitions mark the start of the Quakers' remaining 14 conference games — a challenge, no doubt.

Following a 26-point loss to Big 5 rival Villanova on Wednesday, Penn women's basketball was prepared to rely on its seniors and stars to get the squad back in the win column. Maybe it didn't have to. 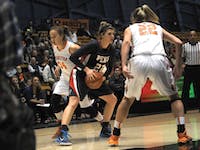 Looking to go 4-0 in the Big 5 on the season, the Red and Blue instead found themselves at the mercy of a Villanova squad firing on all cylinders, losing 70-44.

The last time Penn women’s basketball played a team from Philadelphia, the Quakers did something never before seen in program history, clinching a share of the Big 5 title in dramatic fashion. Now, with the Red and Blue set to do battle against another local rival, the squad has the opportunity to cross another seldom achieved goal off its bucket list: beat Villanova. Having already knocked off La Salle, St. 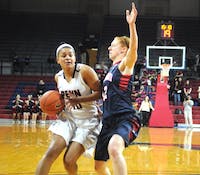 In the first meeting between the two teams since 1995, the Quakers defeated Richmond for the first time in school history, 49-47, off the strength on a late three from freshman Anna Ross.

For most of Monday evening at the Palestra, offense was tough to come by for Penn women’s basketball. But unlike the majority of their shots, the Quakers did not allow their shot at history to rim out. 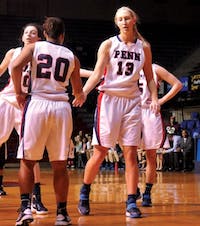 Penn women's basketball prepares to 'D' up against Lafayette

The past few games have revealed a lot about Penn women’s basketball.

Penn women’s basketball came into this season with a lot of moving parts. No experienced ball-handlers. 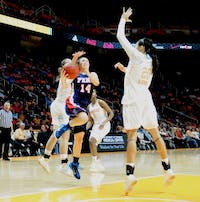