33.2 seconds. Tie game. An NCAA Tournament bid on the line.  In the end, experience trumped all as senior forward Steve Moundou-Missi drained a midrange jumper in the final 10 seconds to help Harvard claim its fourth straight automatic NCAA Tournament bid.

How Penn fared against Harvard and Yale

With Harvard and Yale playing a one-game playoff for the Ivy League's NCAA Tournament bid, here's a look at each team's two games against Penn. 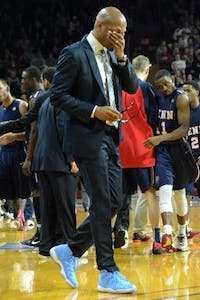 Numbers don’t lie. That’s seems to be the philosophy that Penn Athletic Director Grace Calhoun employed on Monday when she informed Jerome Allen that he will not be retained as Penn basketball head coach. 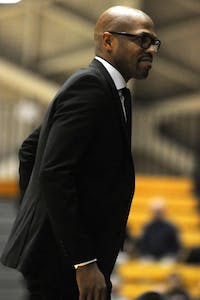 When Penn men’s basketball took the floor of the Palestra on Saturday night, there were multiple elephants in the room. 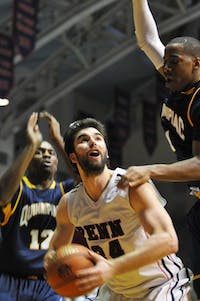 Following nearly six seasons at the helm of Penn basketball, Jerome Allen will not return to the program next season.
03/07/15 4:16pm 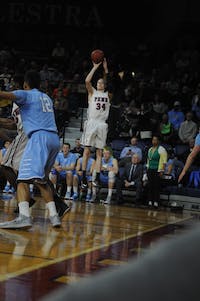 The numbers tell the story: Penn basketball has been anything but successful in Ivy League play this season. In the midst of a seven-game losing streak, the Quakers have only three contests remaining before wrapping up their 2014-15 campaign.

Early in the Ivy League season, Penn basketball nearly lost one of its freshman phenoms to injury.

Already written off as bound for last place in the Ivy League, Penn basketball came oh-so-close to pulling off an upset on Yale that would have sent the conference into chaos.

Staring at the ultimate humiliation of a 20+ point loss to Brown, Penn basketball relied on an unlikely group of characters to give itself a chance. It still wasn’t enough.

When Penn basketball met Dartmouth at the Palestra on Jan. 30, the Quakers picked up their first Ivy win of the season largely because they limited Big Green guard Alex Mitola to six points. On Saturday, the Red and Blue were nowhere near as lucky. In a game that featured 11 lead changes, Dartmouth rode 15 second-half points from Mitola and managed to surmount Penn's largest lead of the game with a clutch 17-6 run late in the contest, one that allowed the Big Green to pull away with a 67-62 win.

Nowlan | Effort not there for Penn basketball

Well, this is getting pretty familiar. On a snowy Boston night at a sold-out Lavietes Pavillion, the Quakers were handed another humbling loss by Harvard, a 69-46 defeat that emphasized just how far Penn is from the Ancient Eight’s top tier. It was the fourth consecutive loss for the Quakers, with each defeat coming by at least 16 points.

Penn basketball searches for change of scenery on road

Looking into the eyes of a four game road streak against a crew of Ivy foes, Penn men’s basketball — owner of the longest active losing streak in the Ivy League — is hoping a change of scenery will improve their fortunes. While a loss to Yale last weekend was not unexpected, a 75-48 point loss is always hard to chew and a defeat at the hands of cellar-dwelling Brown the next day didn’t ease the Quakers’ pain. Since Penn’s thrilling victory over Cornell on Feb. 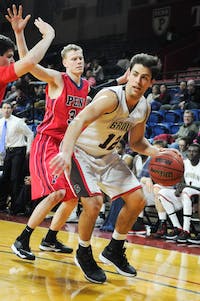 Penn basketball — like most of Brown’s opponents — thought it could beat the Bears by limiting their powerful forwards, Rafael Maia and Cedric Kuakumensah. JR Hobbie begged to differ.