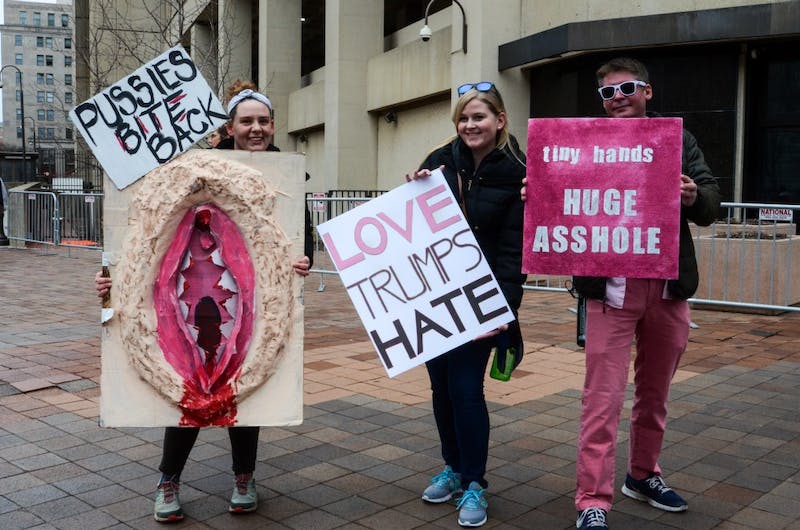 Scenes from the D.C. Women's March

Today, half a million people gathered on the streets of Washington D.C. for the Women's March. Protesters included people of all ages and genders, and they carried with them a multitude of clever signs. In fact, so many people showed up for support that organizers found it impossible to follow the original march route. Joy Lee | News Photo Editor 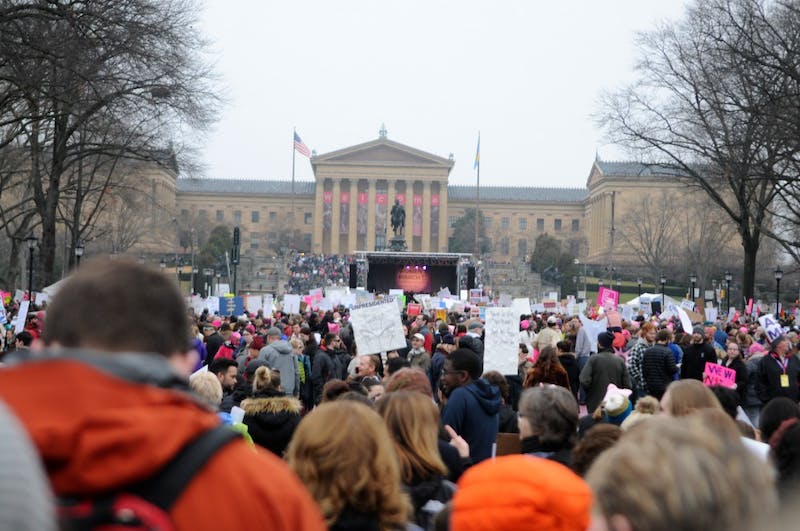 As women's marches happened around the world today, Philadelphia was the host of its own march. Thousands of people — women, men, and children — marched from Logan's Circle to the step of the Philadelphia Art Museum. Marchers, who held a myriad of unique signs, chanted and cheered as they made their way down Benjamin Franklin Parkway on Saturday morning. The crowds remained peaceful and positive.Photos by Ananya Chandra and Morgan Rees 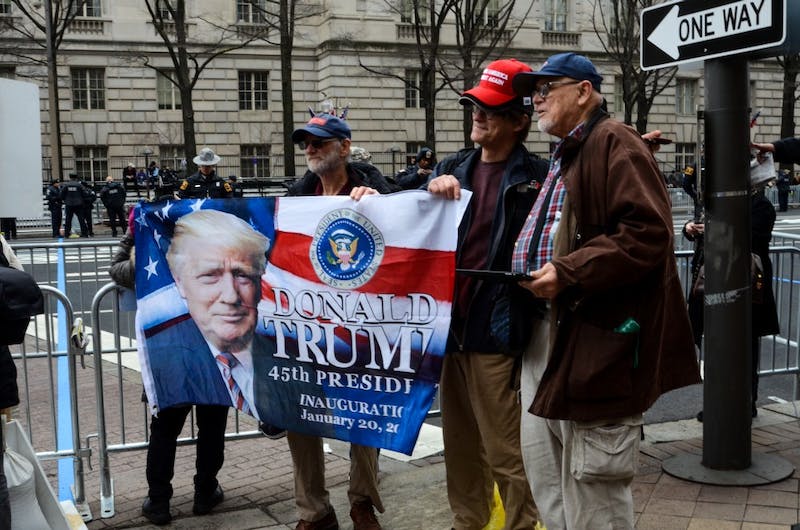 1968 Wharton graduate and President Donald Trump and Vice President Mike Pence paraded around Washington D.C. in the afternoon following their inauguration. Spectators of the event included both pro-Trump supporters, who excitedly cheered on the new president when he passed, and anti-Trump protesters, who collectively booed him. Joy Lee | News Photo Editor 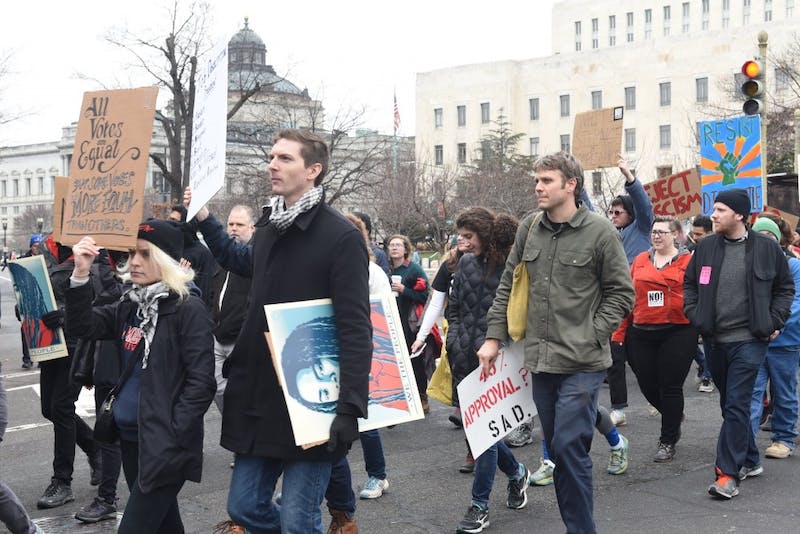 Photo Gallery | Protesters march at the inauguration of Trump in D.C.

Protesters took to the streets at Trump's inauguration, chanting things like "Say it loud, say it clear, refugees are welcome here," and holding signs criticizing Trump and his rhetoric. The march paused for one of the protesters to give a short speech condemning hate, and the group engaged in a "die-in" where everyone lay on the ground. Then, they got up and kept marching.  Avalon Morell | Associate Photo Editor 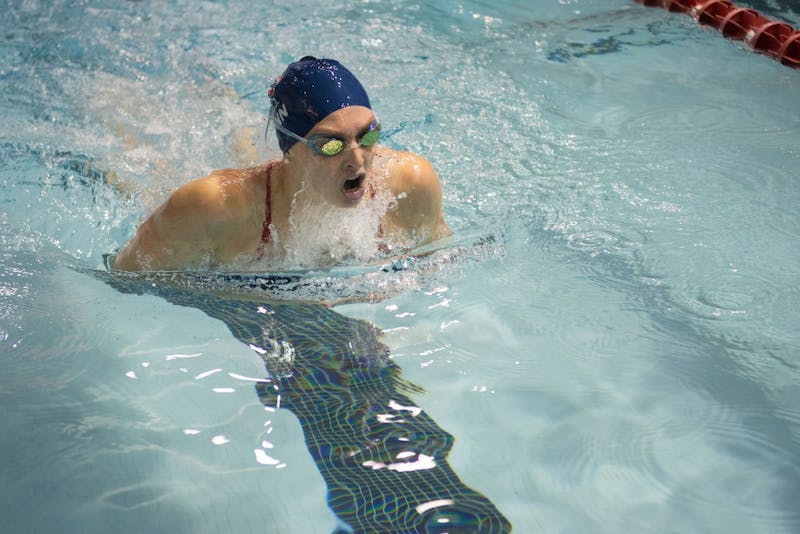 The Penn men’s and women’s swimming and diving teams hosted Brown and Harvard for the final Ivy competition of the regular season last weekend. But while both the men and women defeated Brown by scores of 215.5-82.5 and 181-119, respectively, senior day was spoiled for the 18 outgoing members of Penn’s roster by Harvard, which beat the men, 206-88, and the women, 165-135.Zach Sheldon | Sports Photo Editor 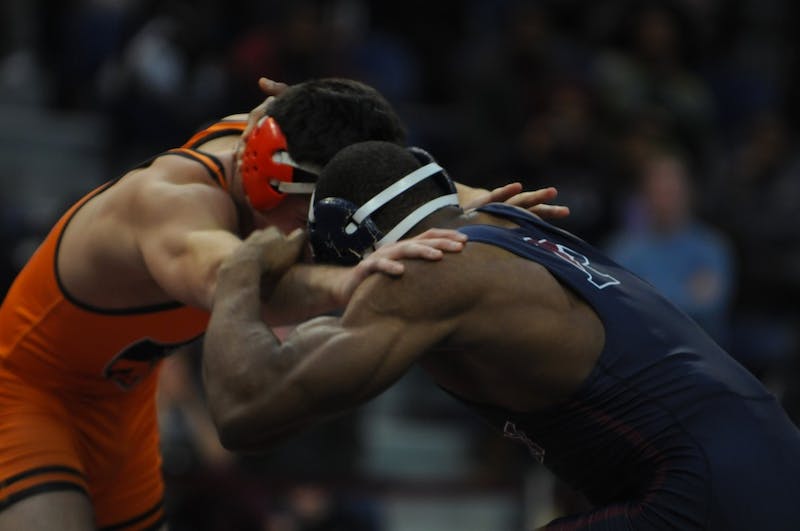 Penn wrestling started conference play on Sunday with a tough loss to Princeton, 28-8. However, the coach is hopeful that the team will meet expectations as the season surges onward. Zach Sheldon | Sports Photo Editor 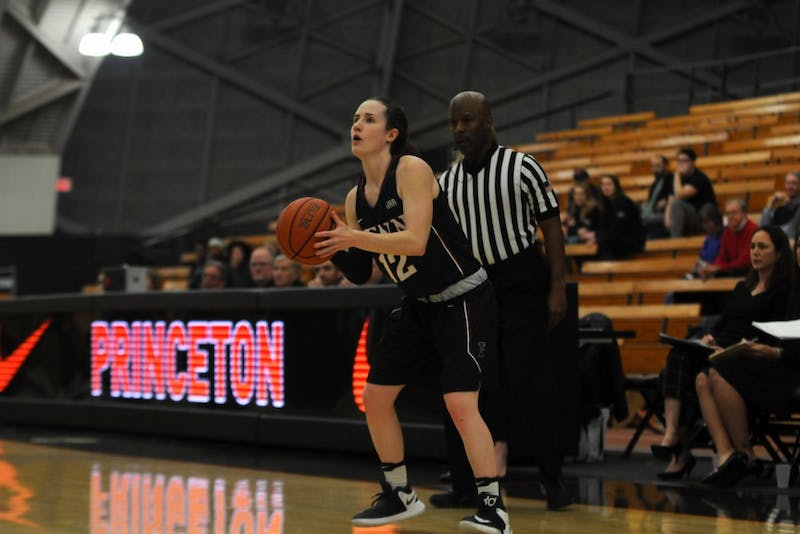 Penn women’s basketball opened up its Ivy League season against Princeton on Saturday, fighting back and forth for all 40 minutes until they pulled away late in the game to secure a 62-57 victory.Zach Sheldon | Sports Photo Editor 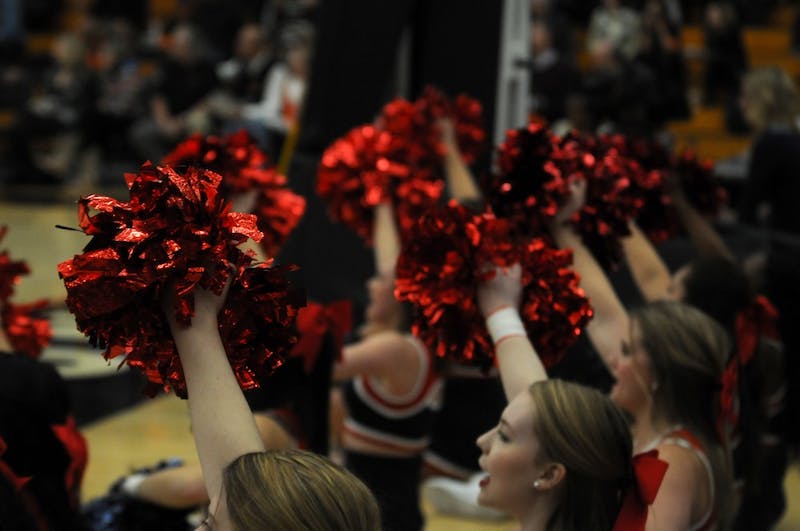 Penn men's basketball began its season against Princeton on Saturday, but despite coming back from a 21-point deficit late in the game, the Tigers ultimately proved too much to handle.Zach Sheldon | Sports Photo Editor 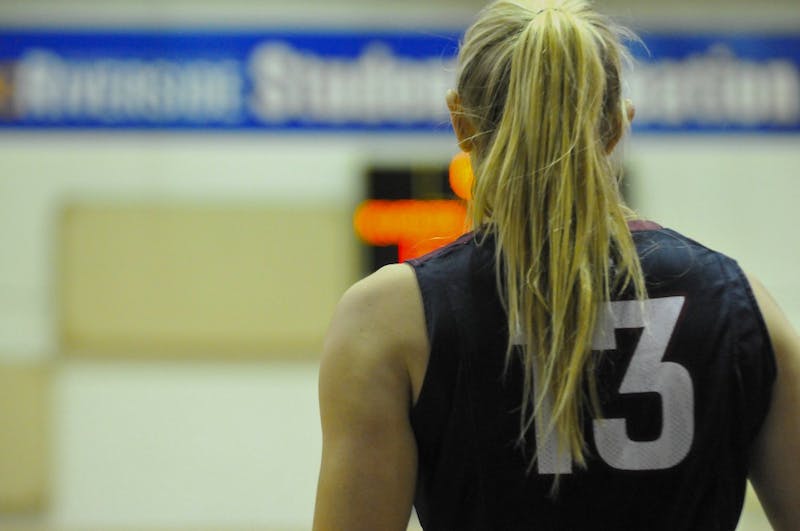 Over winter break, Penn women's basketball traveled to Los Angeles to try and defend their Ancient Eight crown. While the team posted a pair of wins against CSU-Northridge and UC Riverside, there are still many improvements to be made if they hope to defend their Ivy title.Zach Sheldon | Sports Photo Editor 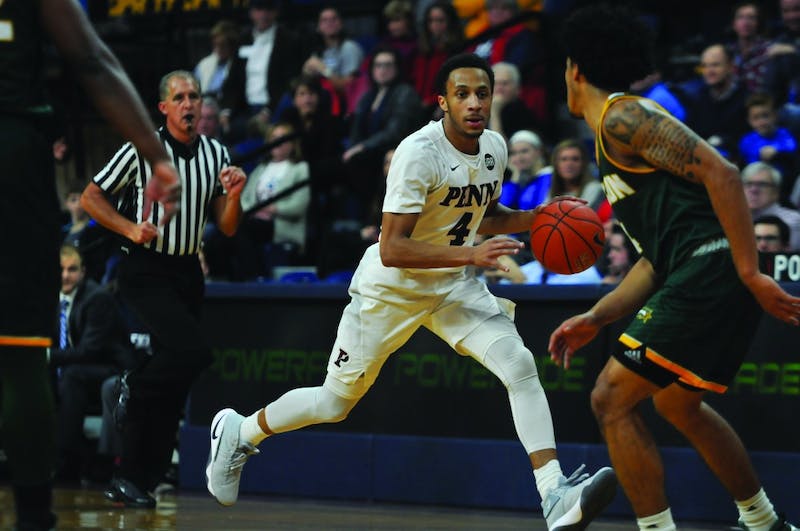 Penn men's basketball huffed, and they puffed, but they couldn't knock down George Mason on Saturday afternoon in their 79-60 loss. The Quakers (3-5) found themselves just two points down with eight minutes left in the game, but a 13-0 run by the Patriots (8-3) over the next six minutes doomed the home team that simply ran out of gas in the end. Three players scored over ten points for Penn, but no one shined brightly enough to take the game by the scruff of its neck. In the end, the Red and Blue's quality was revealed as George Mason ran out as winners. // William Snow | Senior Sports Editor-Elect 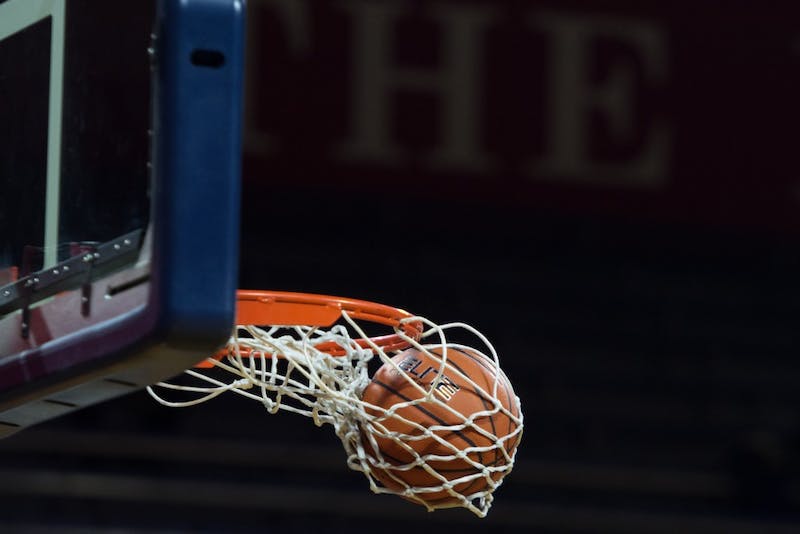 Penn men's and women's basketball hosted a doubleheader in the Palestra on Wednesday night. The women kicked off action with a dramatic late loss to La Salle. Despite leading late in the fourth quarter and in overtime, the Quakers lost 58-56 on a buzzer-beater. The men followed up with a blowout victory over Lafayette. Freshman AJ Brodeur and senior Matt Howard powered the Red and Blue to an 81-52 win to end the night. 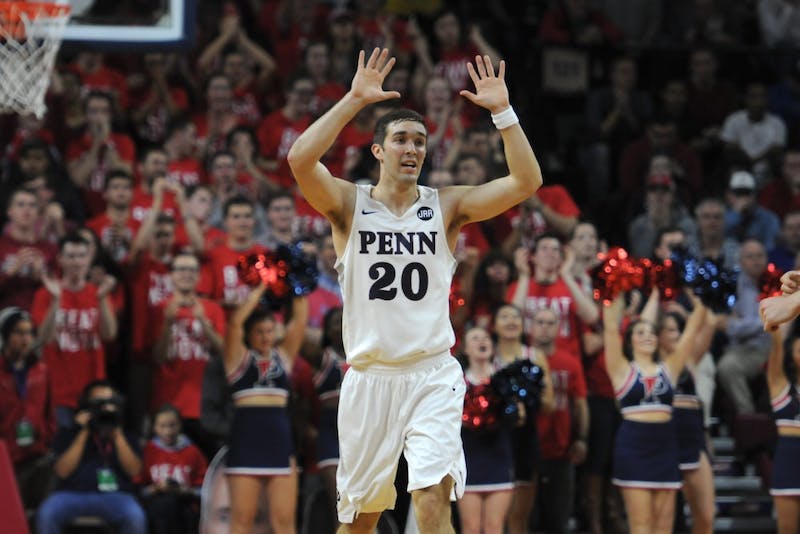 Tuesday evening, the defending NCAA champions made their way to University city as Penn basketball hosted No. 2 Villanova in front of a sold out crowd. The Wildcats set the tone early in their 82-57 blowout of the Quakers and never looked back, out-shooting and out-scrapping their Big 5 opponents at every turn. The loss dropped Penn to 2-3 on the season, while Villanova moved to 7-0 and continued to assert their authority as reigning champions of college basketball.Photos by Ananya Chandra, Luke Yeagley, and Mark Shtrakhman 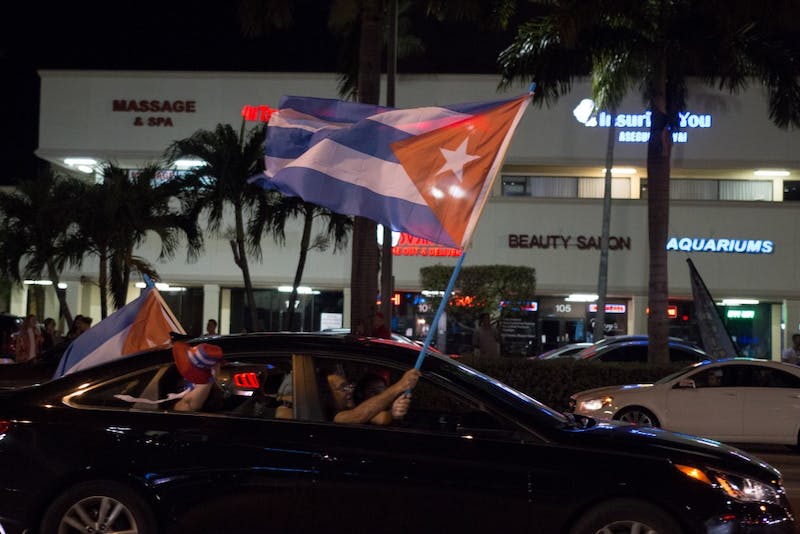 As news of Fidel Castro’s death broke Friday night, the Cuban-American population in Miami were among the first to react— taking to the streets in celebration of Castro’s death following almost five decades of ruling the island nation. Although his younger brother Raúl Castro has been in control since 2008, Fidel’s death represents to many Cuban-Americans closure on a painful chapter in both their lives and in their nations history. In Hialeah, FL, celebrations lasted into the early hours of Saturday morning, with the sounds of pots and pans smashing, cars honking, and people cheering filling the air around 49th Street. 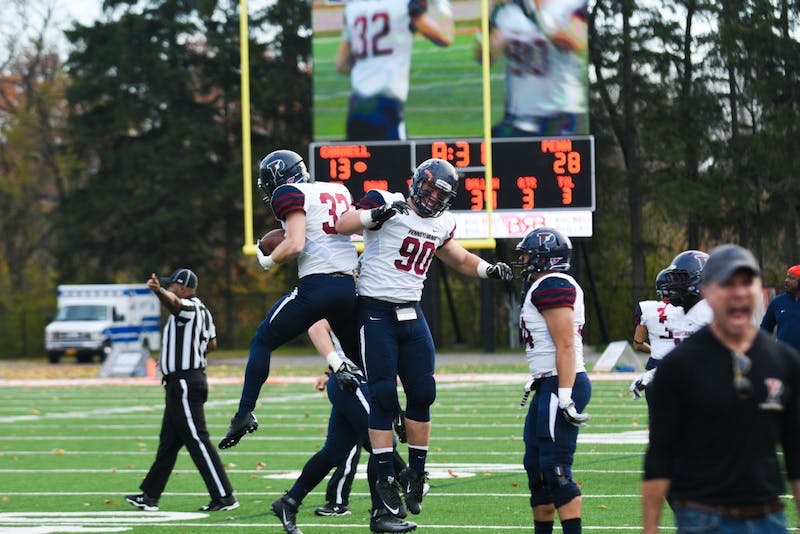 Penn football won its second consecutive Ivy League title on Saturday in their 42-20 victory over Cornell. The Quakers went up to Ithaca on a mission and followed through as they took an early lead and never looked back. Highlights included a pair of Alek Torgersen touchdowns and a TD catch by senior lineman Nick Demes. The title is the Red and Blue's second in a row; however, they share it this year with rivals Princeton after sharing it last year in a three-way tie. The Red and Blue's win is also a fitting way to end a record career for Torgersen, a potential draft prospect come 2017.Photos by Sam Holland and Griff Fitzsimmons 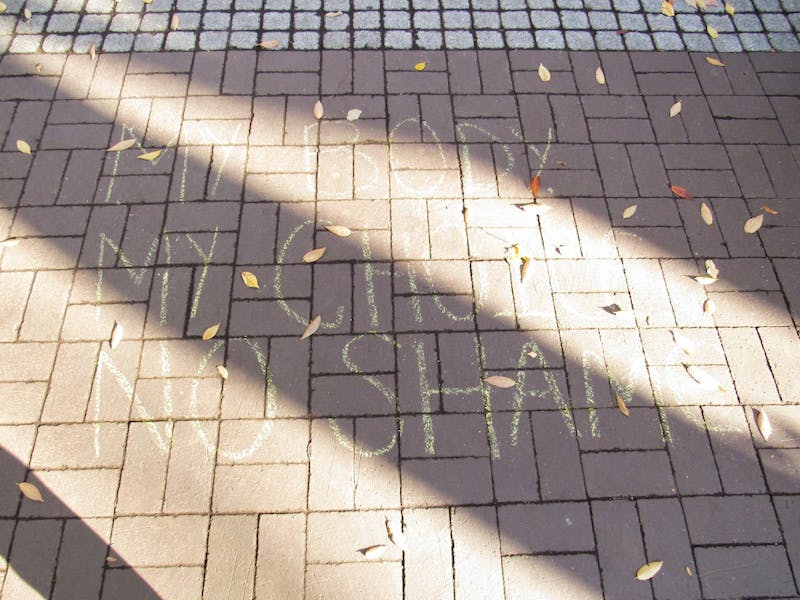 Covered in chalk, Locust Walk turned into a battleground Thursday morning. When pro-life groups wrote various messages on Locust, pro-choice students responded by crossing out, erasing, and commenting on the messages. This call and response was evident along Locust on the western end of campus from the compass to the bridge.// Photos by John Ortega and Manon Voland 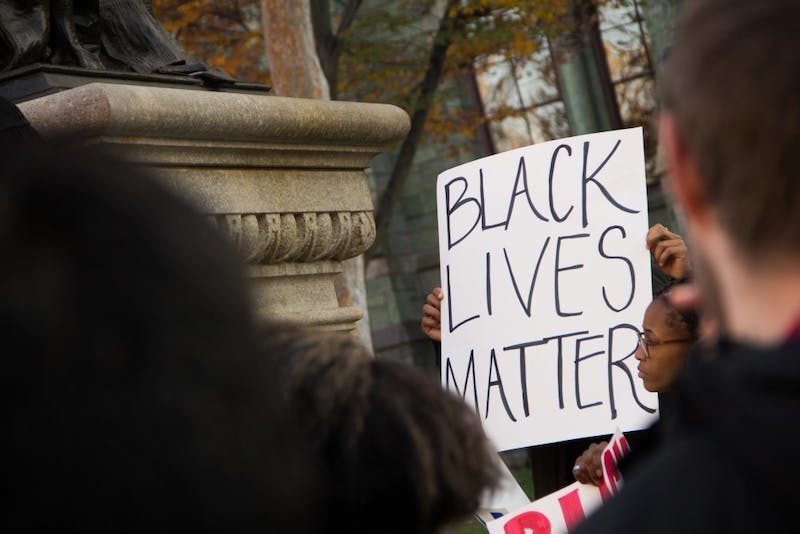 Students Organizing for Unity and Liberation (SOUL) hosted a demonstration in front of College Hall on Thursday afternoon. Members of SOUL encouraged each other and bystanders to speak about their experiences with prejudice, particularly in context of a racist GroupMe targeting black Penn freshmen. Demonstrators held signs saying "This Is Not Solidarity" next to a crossed out safety pin, arguing that rather than displaying shallow efforts at solidarity, allies must back up their support with action. This was only the most recent in a series of demonstrations on campus in the wake of Donald Trump's recent presidential victory.// Photos by Carson Kahoe and Lulu Wang 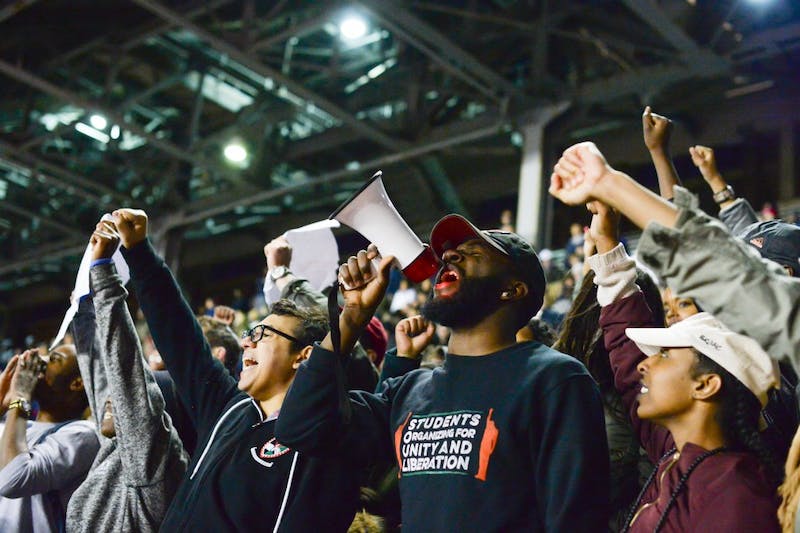 On Friday night, protestors marched to the walls of Franklin Field in response to racist messages targeting freshmen. Their goal was to reach the field, where Penn was playing Harvard in its final home football game of the season, and to "show them black lives matter." Read the full article here.Photos by Alex Fisher | Senior Photographer and Sam Holland | Staff Photographer 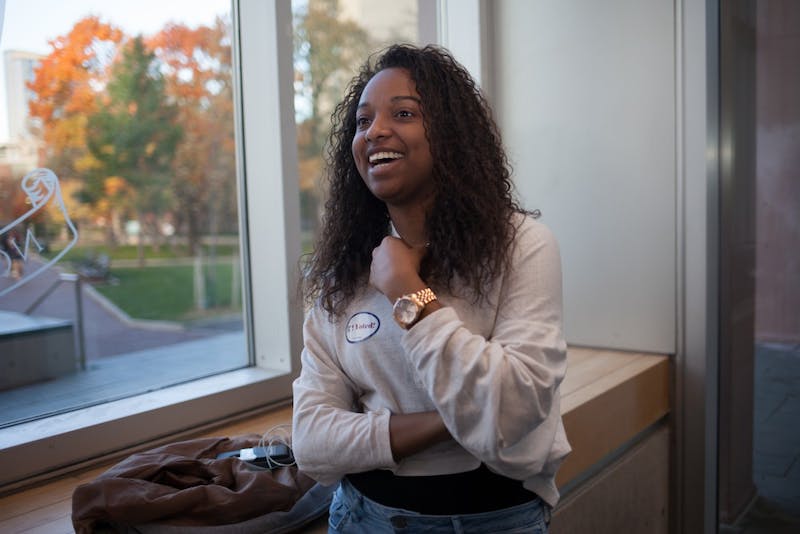 The Daily Pennsylvanian went to polling places across campus to ask students about their experiences voting in this election and their thoughts on this presidential campaign. For most students, it was their first time voting for president.// Brian Zhong 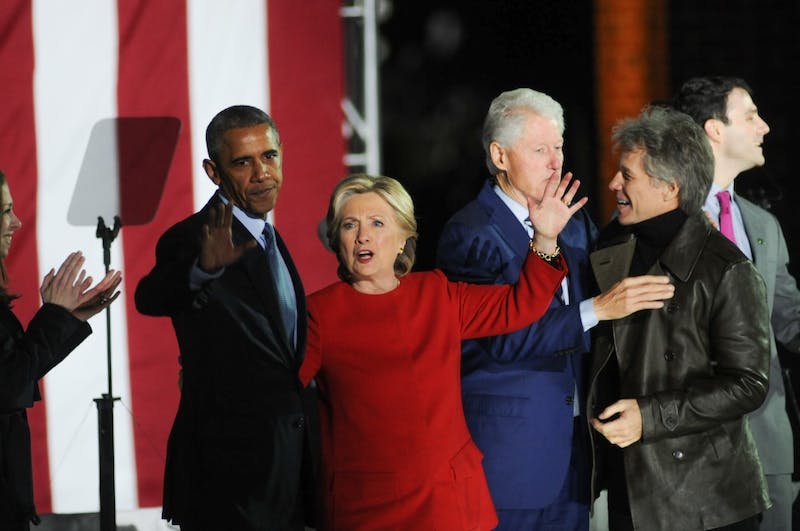 On the eve of election day, Independence Hall's bells welcomed spectators as they filled Independence Mall for one final star-studded rally for Hillary Clinton. For her final push in the Keystone State, the Democratic presidential nominee didn't hold back. Rocker Jon Bon Jovi kicked off the event, highlighting Clinton's bipartisan appeal by reading a Republican voter's open letter in her support. Later, Bruce "The Boss" Springsteen made his case for Clinton before introducing her daughter and husband, Chelsea and Bill Clinton, who in turn introduced First Lady Michelle Obama. The evening reached a crescendo as President Obama followed his wife and made a passionate appeal for Pennsylvanians to vote for Clinton (as well as down-ticket candidate for US Senate Katie McGinty). Finally, Secretary Clinton herself took the stage to loud applause. In the final hours before election day, Clinton urged voters to choose her. Photos by Carson Kahoe, Julio Sosa, and Mark Shtrakhman 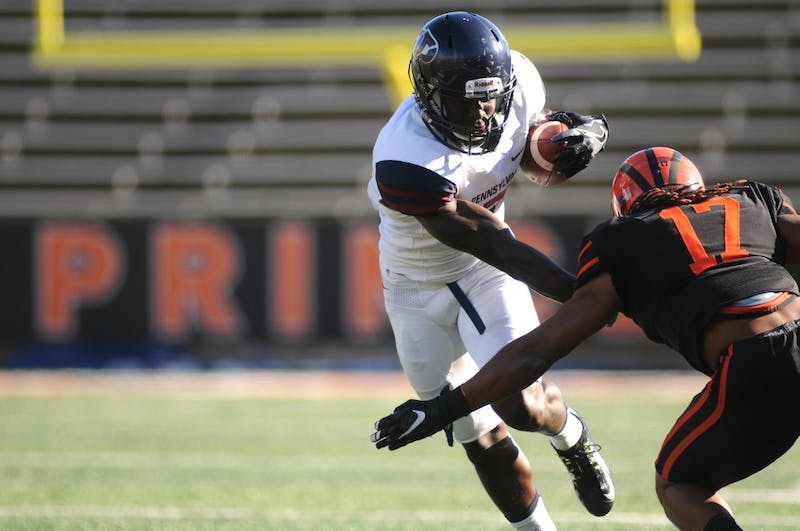 Football vs. Princeton | A Sobering Defeat

Despite the hype around Penn's altered policy in tailgating this weekend, the final focus remained on one thing: the football game. Penn travelled to Princeton University this weekend to face off against the Tigers in what ended in one of the worst defeats for Penn Football in a long time. The Quakers were shutout 28-0, and were barely able to find any rhythm in their offense. The Red and Blue will look to turn things around at home next weekend against Harvard - and keep their dreams for an Ivy League title alive.Photos by Ananya Chandra and Zach Sheldon