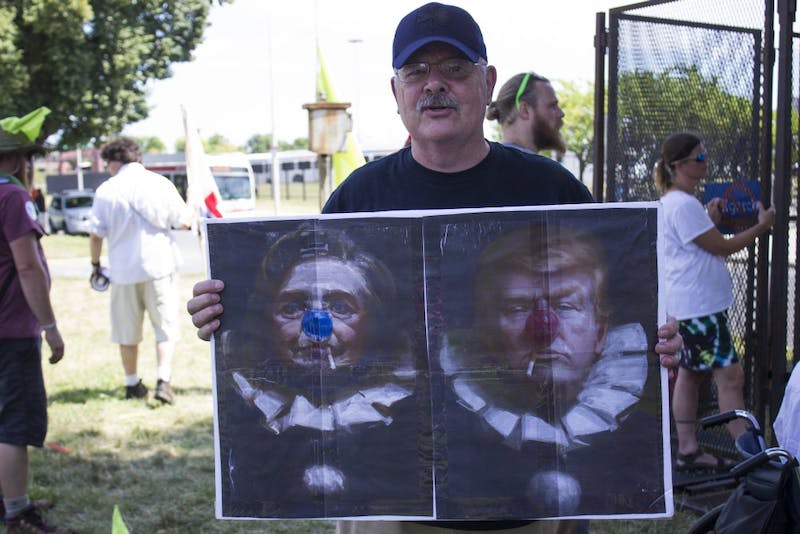 Humans of the DNC

Protesters from all over the United States flocked to Franklin D. Roosevelt Park for the Democratic National Conventional. The Daily Pennsylvanian spoke to some of them to document their stories.Photos by Guyrandy Jean-Gilles | Photo Editor 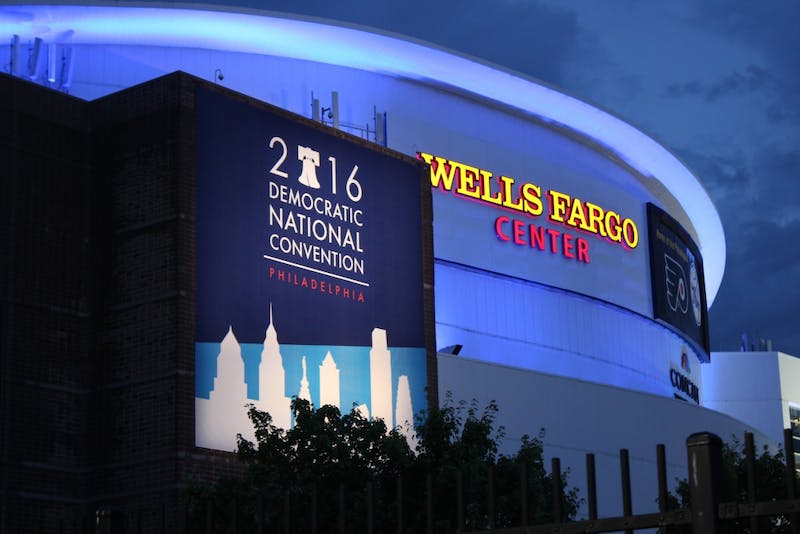 Photos: Day one of the DNC

Sweltering heat didn’t stop hundreds of protesters from surrounding SEPTA’s AT&T station on Monday afternoon, just in time for the official start of the 2016 Democratic National Convention. They held signs with phrases like “Democracy Spring” and “Bernie or Bust,” and many in the crowd called for the party to reject presumptive nominee Hillary Clinton in favor of Vermont senator Bernie Sanders as the Democratic candidate for president in November. Sanders attempted to comfort his supporters in his speech later Monday night, when he said, “we have begun a political revolution to transform America and that revolution — our revolution — continues.” Sanders, who has not formally suspended his presidential campaign, stood by his July 12 endorsement of Clinton for the Democratic nomination.Read more of the Daily Pennsylvanian's coverage of the DNC at the DPolitics blog. Photos by Photo Editor Guyrandy Jean-Gilles, Design Editor Alex Graves and Staff Reporter Mitchell Chan 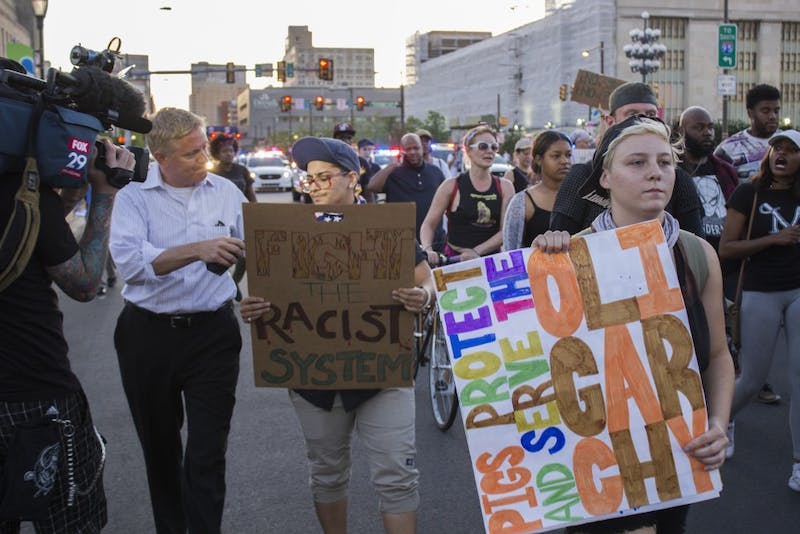 Black Lives Matter protesters marched past Penn's campus on Market Street around 8 p.m. on Sunday. They held signs and chanted, "Show me what democracy looks like, this is what democracy looks like," and "What do we want? Justice. If we don't get it? Shut it down." The march progressed to City Hall, with intermittent stops to allow individuals to speak about their experiences with racism and share ideas to enact tangible change. At City Hall, the largest group of people gathered to chant and share ideas and experiences, and then the march continued past it. Photos by Guyrandy Jean-Gilles | Photo Editor 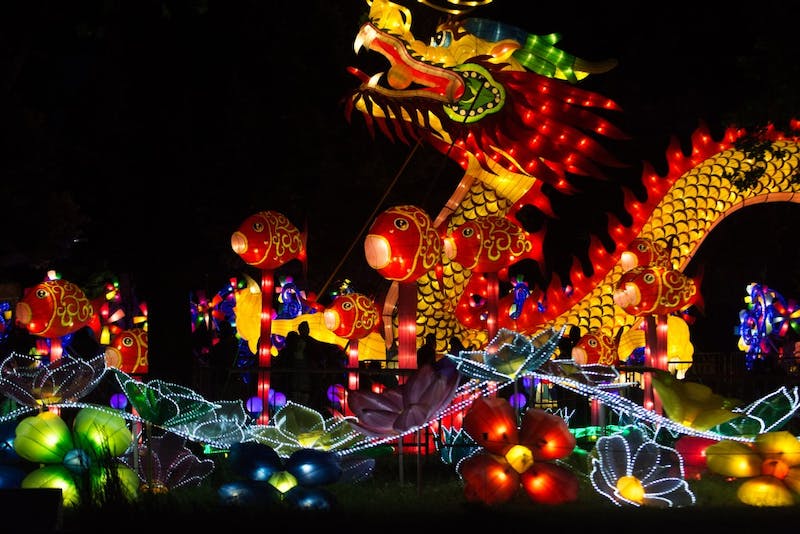 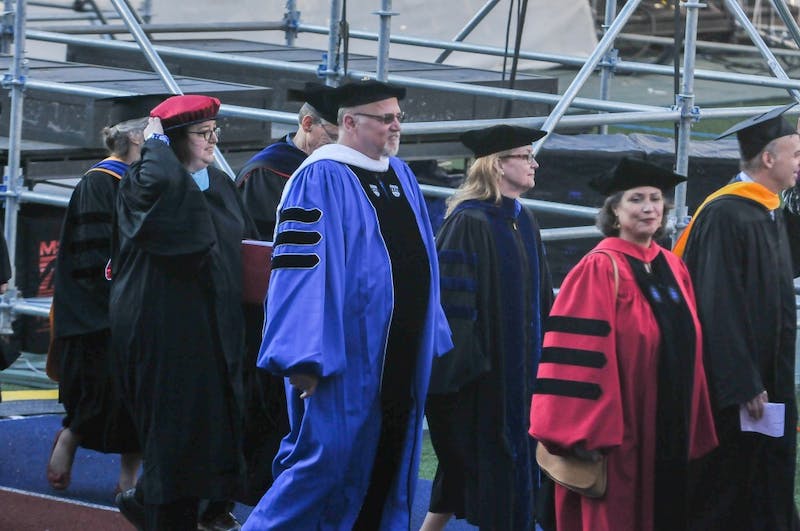 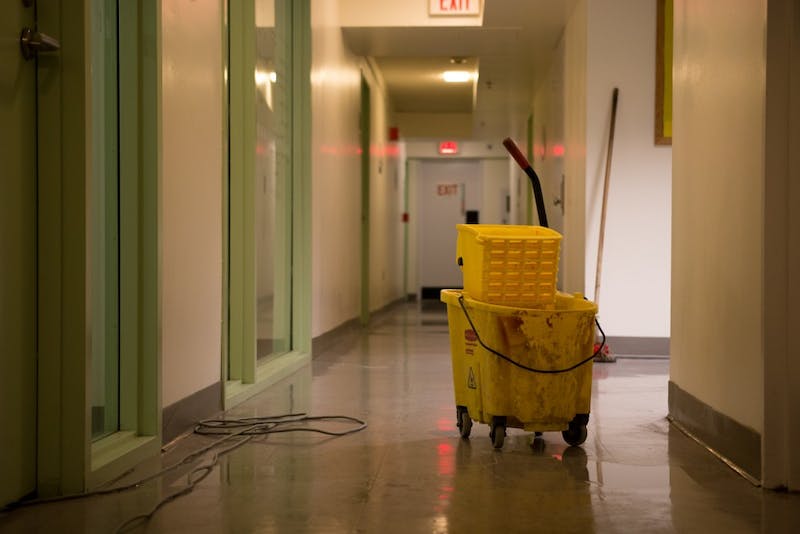 At around 6:45 p.m, an alarm went off at Harnwell signaling the start of a flood due to a broken sprinkler. Residential services worked hours to clear the flooded halls and rooms, starting with the seventh floor and working their way down. Students utilized nearby trashcans as makeshift water collectors in their rooms to mitigate the flooding as they waited for assistance from the school.The water eventually reached the mezzanine, with tiles collapsing from the ceiling.  Students who wished to be relocated for the night were accommodated by the school, as many must study for finals happening in the coming days. An article on the situation can be found here.Photos by Julio Sosa | News Photo Editor 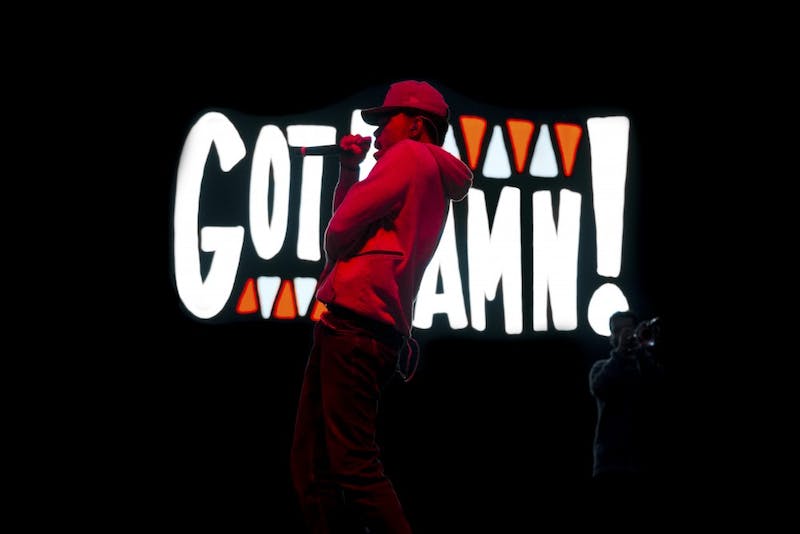 During SPEC's annual Fling concert, EDM artist 3LAU and Chance the Rapper took the stage at Franklin Field. Although Chance almost cancelled his set due to illness, making the audience wait almost 90 minutes between 3LAU and Chance's performances, the show was a success. Chance played crowd favorites like "Sunday Candy" and "Cocoa Butter Kisses," while 3LAU played mashups of popular songs along with a few originals. Photos by Julio Sosa and Susanna Jaramillo 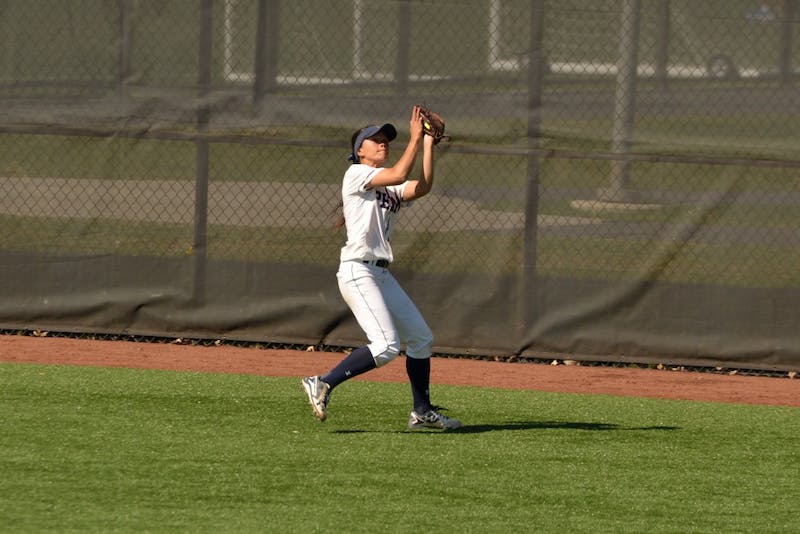 Penn Softball played a double header against Saint Joseph's at Penn Park on Wednesday, April 20th. Winning 7-0 in the first game, and 4-1 in the second, the team had a strong performance at Penn Park. Next up, the Quakers will be playing four games against Cornell this weekend at Penn Park. 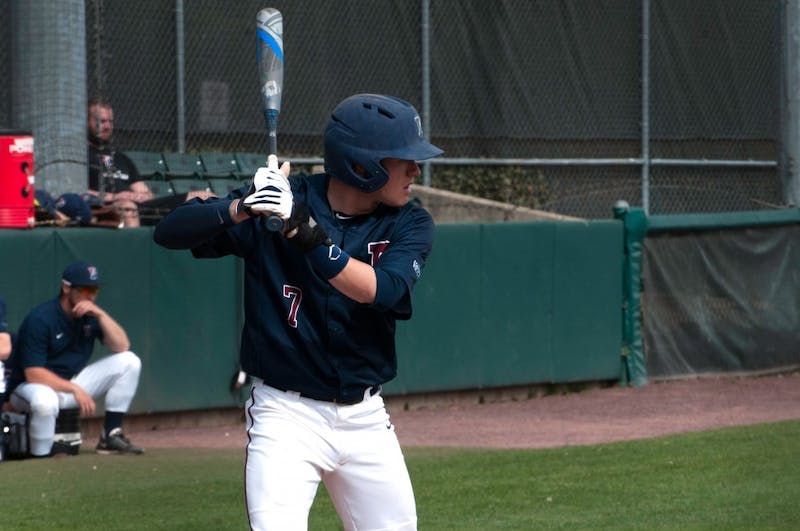 Tuesday afternoon, La Salle headed to Meiklejohn Stadium to take on Penn baseball as the Quakers powered past the Explorers on the heels of a four-run fifth inning to win the midweek contest, 9-3. 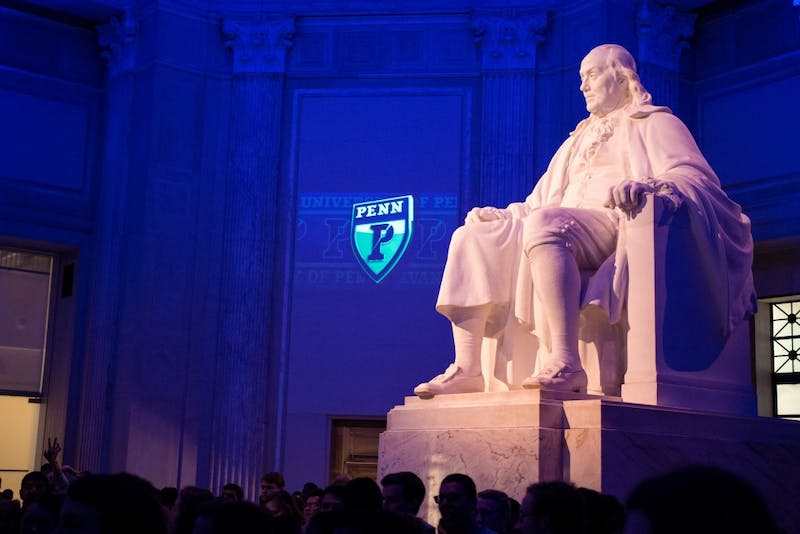 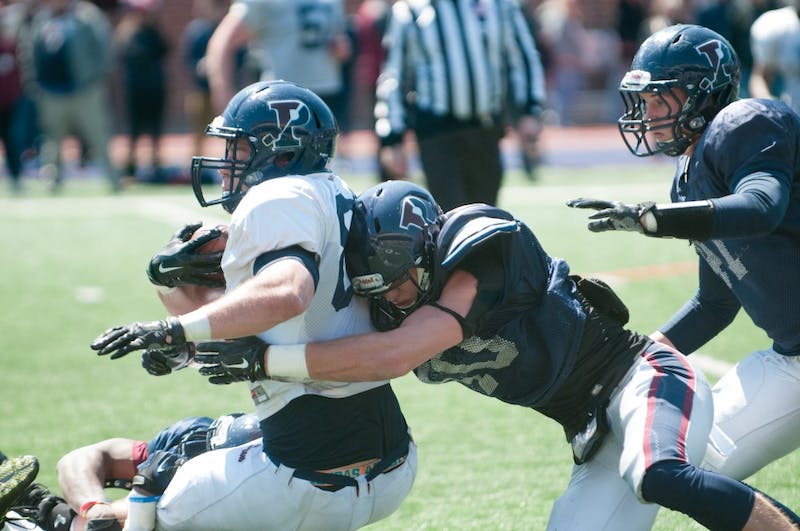 On Sunday, Penn football held its annual Spring Game at Franklin Field, running a series of situational drills pitting coach Ray Priore's offense against its own defense as students and alumni watched. 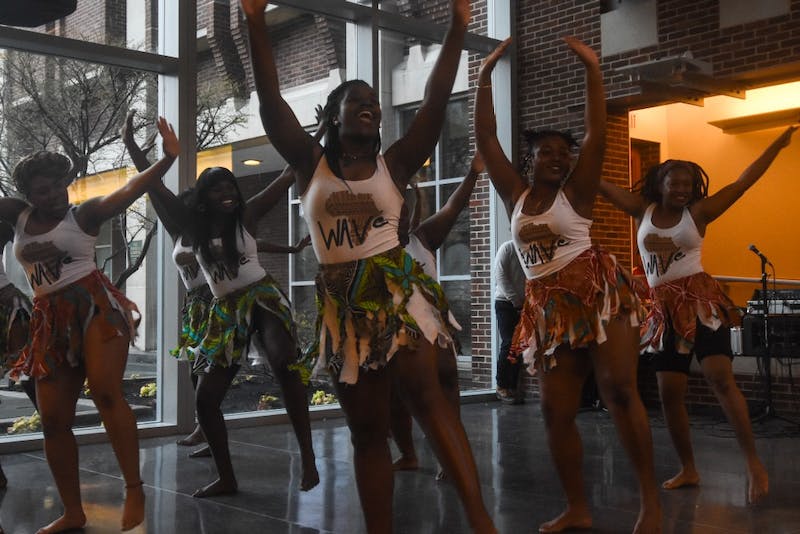 The United Minorities Council hosted "Celebration of Culture 2016: FORMATION" in the Penn Dental School on Saturday night to bring together and showcase different cultures on Penn's campus. The event included ethnic food, a fashion show and dances by some of Penn's cultural groups including WAVE and Penn Yalla.Photos by Melissa Tustin-Gore | Staff Photographer 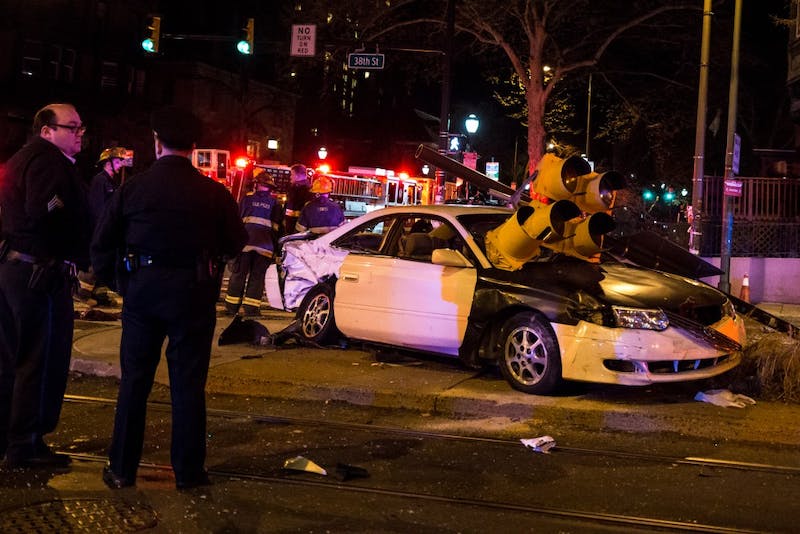 At approximately 3:50 a.m. a black Laredo Jeep speeding down Walnut Street collided with a white Toyota Solara at the intersection of 38th and Walnut, according to police and bystanders at the scene. Debris and glass littered the intersection, with police arriving on the scene shortly after the crash. The black Jeep was traveling at least 65 miles per hour and had sped past three red traffic lights before crashing with the Toyota, said taxi driver Mohammad Ali, who witnessed the event. (Photos by Julio Sosa | News Photo Editor) 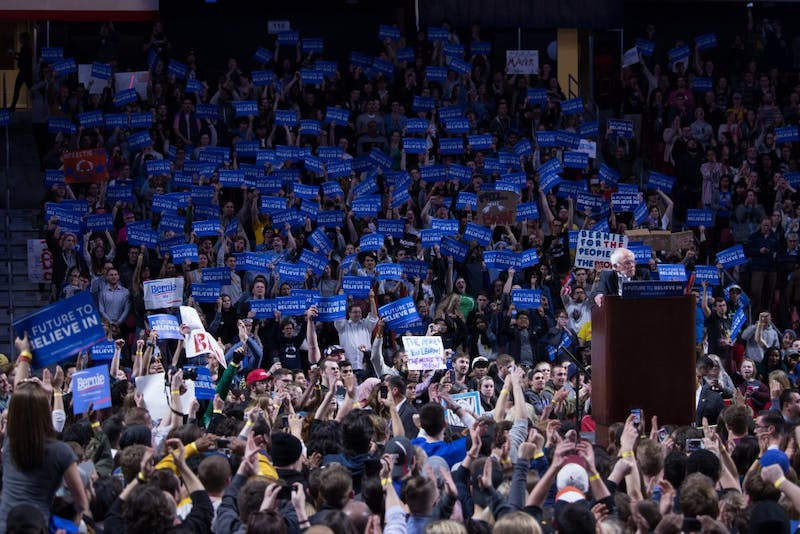 Presidential candidate Bernie Sanders held a rally Wednesday night on Temple's campus. The rally drew a crowd of over 10,000, of which not all could fit into the venue. 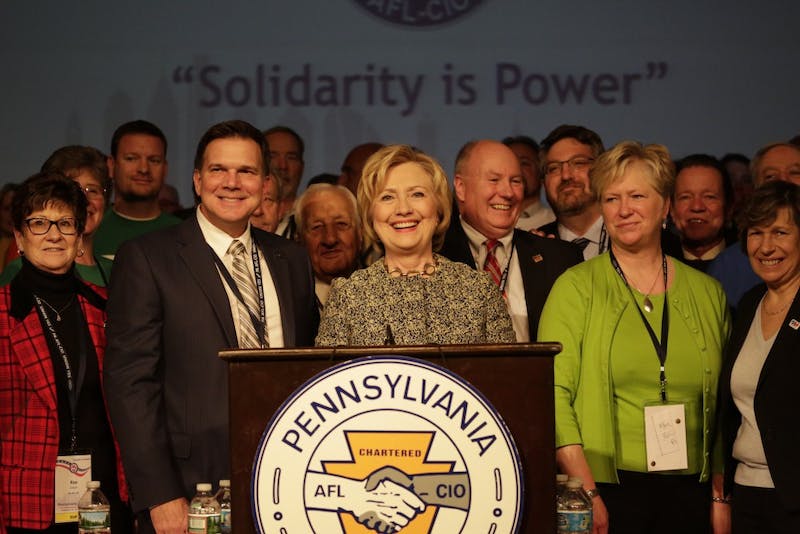 On April 6, Democratic presidential candidate Hillary Clinton spoke with members of Pennsylvania's AFL-CIO chapter about her plans to raise wages and protect American jobs. Among the labor sector, Clinton has a significant leg up on rival Bernie Sanders. (Photos by Olly Liu | Associate Photo Editor) 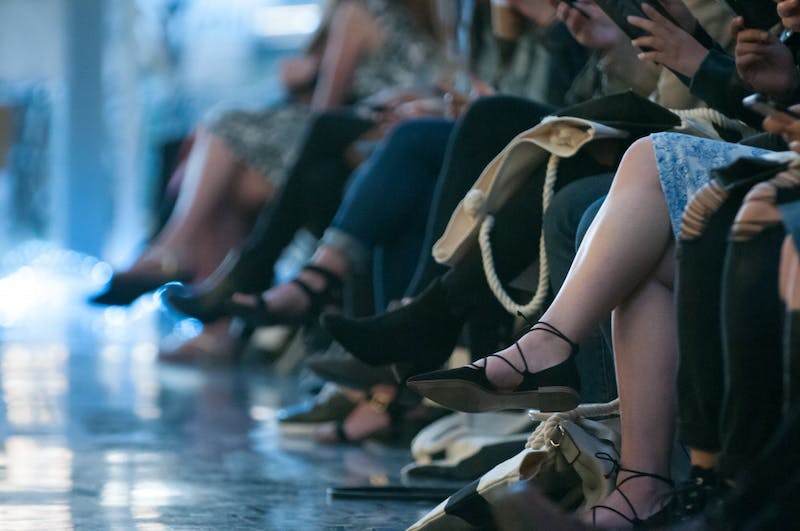 The Penn Fashion Collective presented its 10th annual fashion show on Saturday at the School of Dental Medicine with the theme of “Focus.” Students designed, modeled, and shot the event. (Photos by Katie Zhao) 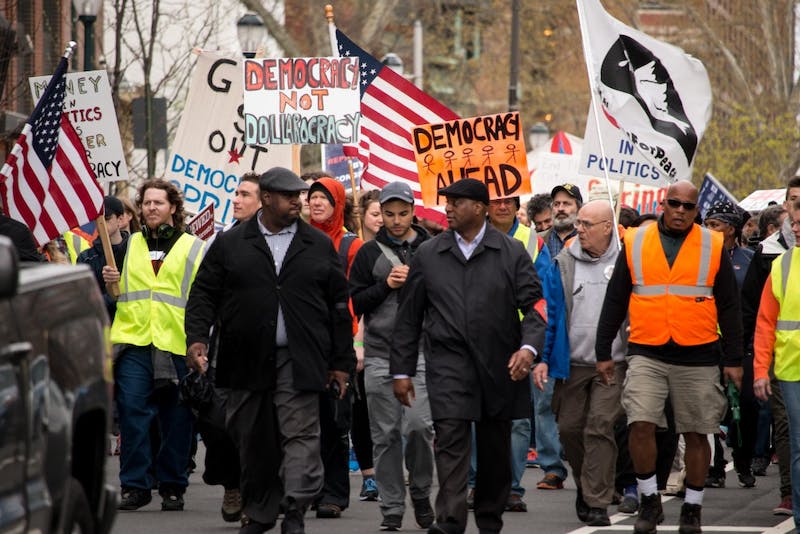 Democracy Spring: A March from Philadelphia to DC

On April 2nd, Democracy Spring began its march from Philadelphia to Washington, DC in protest of big money in politics. They marched down Walnut St. escorted by Philadelphia police, cutting right through Penn’s campus. Upon reaching Washington, DC on the 11th, the protesters plan to host nonviolent sit-ins and legal protests at the Capitol, demanding Congress to take immediate action to “end the corruption of big money in politics and ensure free & fair elections in which every American has an equal voice,” according to Democracy Spring's website. (Photos by Julio Sosa) 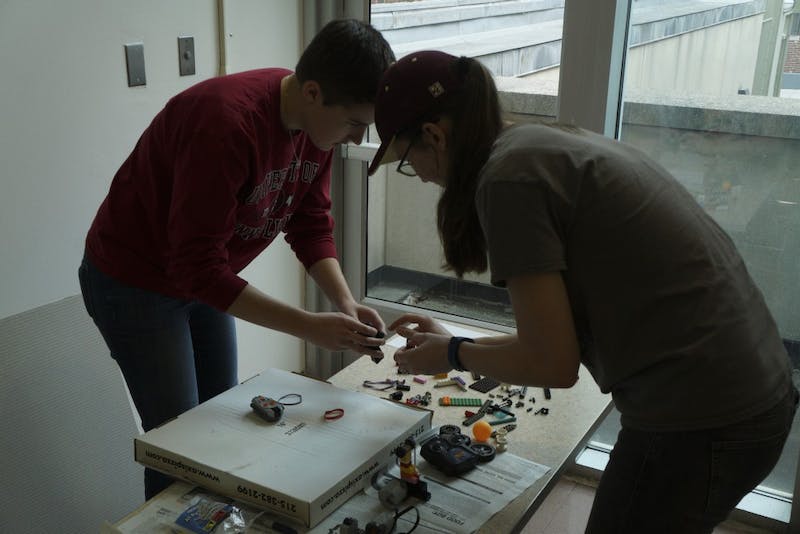 On March 19th, the Science and Technology Wing residential program of Kings Court English House hosted a robotics fair featuring three alumni of the program, Nicholas, Steven and William McGill, who spoke on their careers in robotics. Following their presentations, the residents competed in a “Hebocon” robotics competition. (Photos by Gregory Boyek) 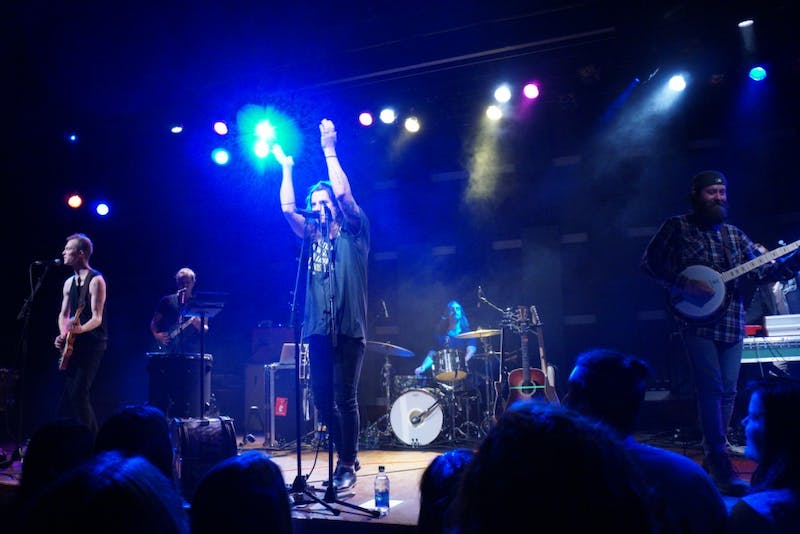 The Saint Johns, a Nashville, Tennessee based band who have just released their first album Dead of Night, opened for folk-hop fusion group Judah and the Lion at the World Café Live on Wednesday night. The Saint Johns are on their first tour of the northeast, while Judah and the Lion are returning to World Café Live for a second year. The up-and-coming band experienced much larger crowds on this visit to Penn, with lead Judah Akers expressing his gratitude to the crowd; “we really don’t take this for granted,” he said. (Photos by Gregory Boyek) 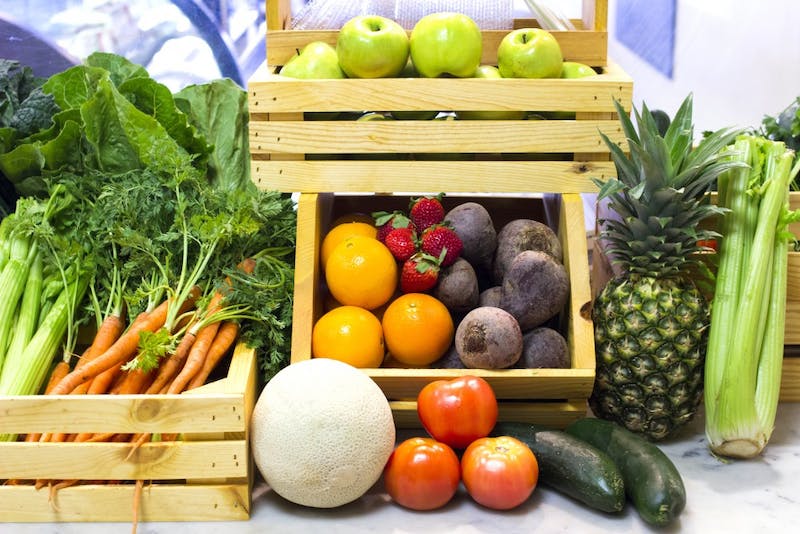 An inside look at how Gia's juices all come together.